Skip to content
March 1, 2019March 1, 2019
The term Shiva appears in the Rigveda, but simply as an epithet that means “kind, auspicious”, one of the adjectives used to describe many different Vedic deities.
Of all the Hindu Gods none appealed to the emotions of a Hindu mind as much as Lord Shiva, the dweller of the mountains and the bearer of the trident, who with His third eye symbolizes the all knowing awareness of the very Brahmand or Universe .
Although universally acknowledged as one of the trinity gods of Hinduism, to His followers, He is Maheswara, representing the Trinity all by Himself, His different aspects manifesting themselves as the creator, preserver and destroyer of the worlds he creates.
Lord Shiva is no ordinary god; He wields a mighty power over the universe. Most devotees are familiar with the different legends associated with Lord Shiva, which uphold his status as an invincible Divine power.
Lord Shiva is also famous for his adornments, and it is believed that each of these adornments has a significance behind it.
Here’s how his adornments are an inspiration for us:

Trishul symbolises the Ida, Pingala and Sushumna, – the 3 main nadis in the energy body of the human system. It also represents the 3 powers of knowledge, desire and implementation.
Gold Plated Turquoise Trishul Kada

Special edition Trishul Kada made in pure 92.5 sterling silver. This unisex kada has intricate work with a pair of black oynx in a bezel setting, situated inside a dumroo, leading into a Trishul. 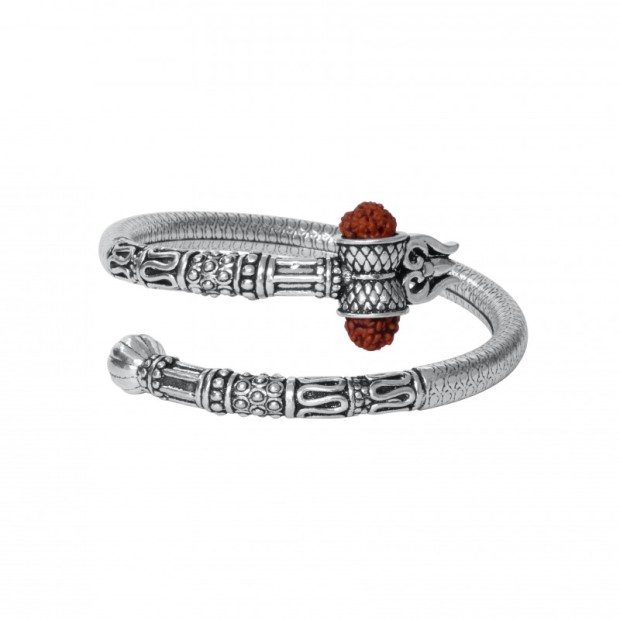 Designed around an exquisitely shaped Trishul and Damroo with a Rudraksha placed inside it , this beautiful kada has intricate hand work on the body
Shiva Shambhu Kada

Designed around an exquisitely shaped Trishul and Damroo with Turquoise stones , this beautiful kada has parrots on the side and intricate rawa work. With a spring lock in the middle , it can be easily slipped on.
TURQUOISE TRISHUL KADA

Special edition Turquoise Trishul Kada made in pure 92.5 sterling silver. This unisex kada has intricate work with a pair of turquoise in a bezel setting, situated inside a dumroo, leading into a Trishul. This is a unisex kada and can be worn by both men and women. !!!!! Om Namah Shivaay !!!!
VAIKUNTA TRISHUL DAMROO NECKLACE 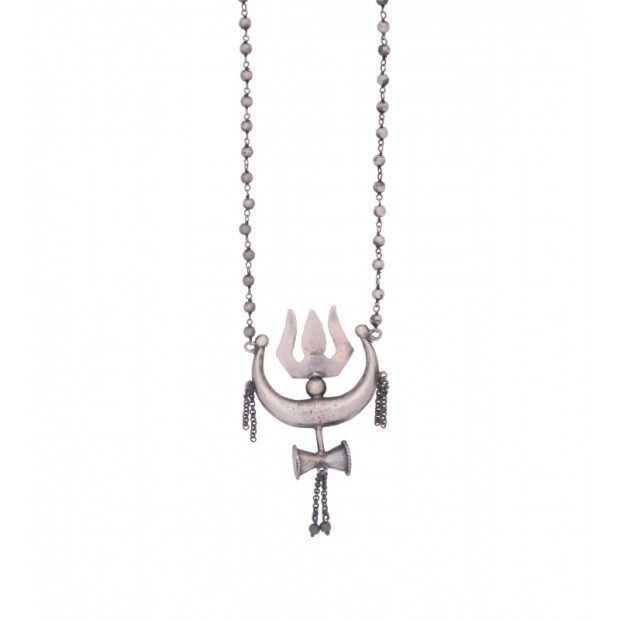 For all of Lord Shivas devotees , this necklace has 3 symbols beautifully put together. The Trishul, Nandis horns and the Damroo. Strung together in a ball chain , this is truly an exceptional piece.
KAMANDAL TRISHUL KADA 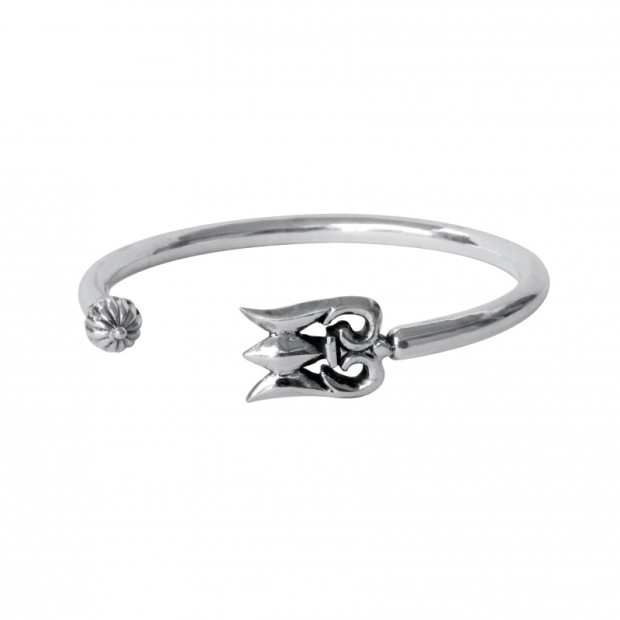 This Kada has been designed around two of Lord Shivas most symbolic objects – The Kamandal and the Trishul The Kamandal of Shiva is made of a cleaned up pumpkin and contains the nectar of immortality- Amrita. Just as a pumpkin cut open and cleaned of all of seeds and dried, can be used to store clean water, the individual must break away the attachment to the physical world and clean himself or herself of ego and desires for experiencing the blessings of Shiva.

The third eye means another dimension of perception has opened up, so that you can see beyond the obvious physical. When it opens , it destroys Ignorance and Evil.
Ajna Ring

This ring represents the Ajna Chakra , on the forehead. The third eye is the eye of spiritual wisdom and knowledge. It is believed that Lord Shiva uses the third eye to see beyond the apparent and protect the good ones from the evildoers. All the evil and the ignorance vanish as the third eye opens. In Buddhism, the third eye refers to Eye of Consciousness, which asks followers to see the world beyond their physical eyes.

Lord Shiva is considered as Adiyogi – the first and most accomplished yogi. The snake stands for the fully awakened “Kundalini” energy.
NAGA KADA

Styled around a naga, we designed it very aesthetically so that the coils look elegant. With the scales showing very clearly across the kada. A stylish Kada that can go with any outfit.
HANDCRAFTED SHIVA HASLI

Shiva’s Tandav is the cosmic dance and his Damaru represents the cosmic sound and the Vedas.
SHIVA TRISHUL RUDRAKSHA PENDANT

This elegant and subtle Lord Shiva pendant with the Trishul and Damroo embellished with a Rudraksha is creatively crafted in 92.5 Sterling Silver. The Damru which is a musical instrument is largely associated with the Hindu deity Lord Shiva and is believed to generate spiritual energy when played.
SHIVA TRISHUL RUDRAKSHA STUDS

Beautifully designed around a Trishul and Damroo with a rudraksha suspended – these will surely capture attention !!!
SHIVA TRISHUL PENDANT

Beautifully shaped pendant , with the most elegant carvings on a Trishul and Damroo. Suitable to wear for both men and women.

Rudraksha can balance the vital forces within the body and fight all kinds of contaminations. They denote purity. The Mala in the right hand denotes concentration.
RUDRAKSHA SHIVA NECKLACE

Rudraksha beads linked with sterling silver to make a striking necklace.
Some pieces are even inspired by the Shiva family!
SHIVA FAMILY TEMPLE NECKLACE

Another beautiful piece done in exceptional Nakashi work depicting Lord Shiva and Parvati , with their two sons , Ganesha and Kartikeya on either side – seated on Nandi the Bull who is their Vahana. Surrounded by a multitude of beautiful peacocks. A South india style temple gopuram capping the top of this exceptional piece. A Yaksha holding up the Divinity . It is truly an incredible piece !!!!
SHIVA PARVATI TEMPLE NECKLACE

Another beautiful piece done in exceptional Nakashi work depicting Lord Shiva and Parvati seated on Nandi – the Bull who is their Vahana. Surrounded by a multitude of beautiful peacocks. A South india style temple gopuram capping the top of this exceptional piece. A Yaksha holding up the Divinity . It is truly an incredible piece !!!! The level of detailing , each and every figure , just stupendous amounts of intricacy.
DAMROO RING 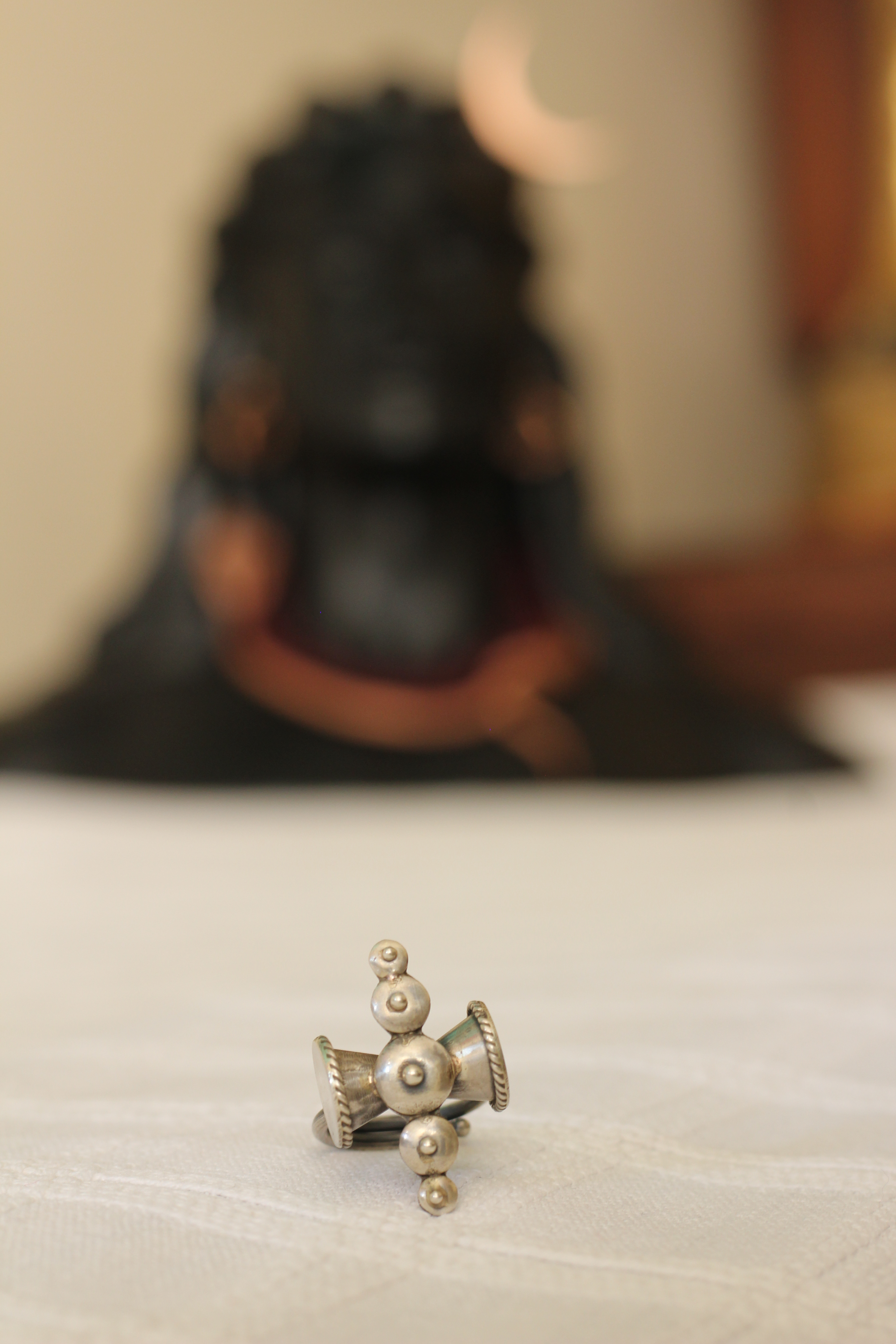 Beautifully designed around Lord Shivas instrument – the Damru , with an abstract rawa detailing in the centre depicting the energy centres. This ring is adjustable and can fit any ring size. This ring is a unisex one and can be worn by both men and women.

All of these adornments have a spiritual significance and all our designs in the Shivaay collection have been made with great devotion and attention to detail. Om Namah Shivaay !!!!!!!
For more details about Shivaay Collection please visit www.ahilyajewels.com