August 9, 2018
The concept of Mother goddess consists of a variety of feminine deities and maternal symbols of creativity, birth and fertility .
Throughout time, many cultures and civilisations have worshiped the image of a mother goddess.
The Paleolithic period is humanity’s longest recorded time on Earth. Archaeological excavations have uncovered figures of what they believe are representations of the mother goddess and fertility. The most famous figure is that of Venus of Willendorf, which is believed to have been carved around 24,000—22,000 BCE.
The Nagada culture of ancient Egypt had some of the earliest paintings of a female deity standing between two lionesses. The lioness, as well as other animals, were representative of a good mother.
In ancient Greek mythology Gaia is referred to as “Mother Goddess” or “Great Goddess”. She was the primordial Earth goddess and considered the great mother of all.
In Roman mythology, Terra Mater is the equivalent of the Greek Gaia. Ceres, goddess of grain, agriculture and fertility became the equivalent of the Greek goddess Demeter.
Tacitus documented rites amongst the Germanic tribes who worshiped their goddess Nerthus, whom he calls Terra Mater, Mother Earth. The eight tribes who worshiped Nerthus would take her statue throughout the countryside upon a wheeled vehicle for all to see and honor her.
Shakti is the primordial cosmic energy and represents the dynamic forces that are thought to move through the entire universe in Hinduism.
Shakti is the divine feminine power, sometimes referred to as “The Great Divine Mother” in Hinduism. As a mother, she is known as “Adi Shakti” or “Adi Parashakti”. On the earthly plane, Shakti most actively manifests through female embodiment and creativity/fertility, though it is also present in males in its potential, unmanifest form. Hindus believe that Shakti is both responsible for creation and the agent of all change. Shakti is cosmic existence as well as liberation, its most significant form being the Kundalini Shakti, a mysterious psychospiritual force.
As a vital cosmic force, Shakti takes many forms and names, including mother goddess, fierce warrior, and the dark goddess of destruction.
SHIVA symbolises consciousness, the masculine principle.
SHAKTI symbolises the feminine principle, the activating power and energy.
Whenever a power becomes active, and wherever energy exists, Shakti is working. Other terms for these primal principles are PURUSHA and PRAKRITI; Purusha is consciousness and Prakriti is nature.
Here are the Indian Goddesses who represent Shakti:
Goddess Kali: Kali is the fierce representation of Shakti. She is also known as the destroyer or the one who liberates the soul and provides moksha. She is an incarnation of Parvati/Durga.
Goddess Saraswati: Saraswati is the goddess of wisdom, music, and learning. She is also known as Sharada.
Goddess Lakshmi: Lakshmi is the well-known goddess of wealth, abundance, and fertility. Lakshmi does not only represent materialistic wealth but also glory, joy, and honor.
Goddess Parvathi: Parvati is one of the goddesses among the Tridevi. She is also known as Gauri. It is through constant penance and devotion she was able to attain the full power of Shakti and become one of the most revered goddesses and also the rightful wife of Shiva. Parvati is the caring and motherly representation of Shakti.
Goddess Durga: Durga is perhaps one of the most well-known manifestations of Shakti. She is one of the principal deities worshiped in Dashain/Navaratri, one of the most important festivals of Hindu devotees. It is also the celebration of the death of Mahisasur, one of the most powerful demon gods. Mahisasur with his power of devotion was successful enough to get the boon of only being killed by a woman.
Here are some of our designs that are inspired by Indian goddesses:

This is truly a stunning necklace with five beautifully rendered hand painting plaques, depicting various deities strung together in a black thread, separated by silver balls. Reversible necklace since the reverse of each plaques has an embossed floral motif mounted in Sterling Silver. 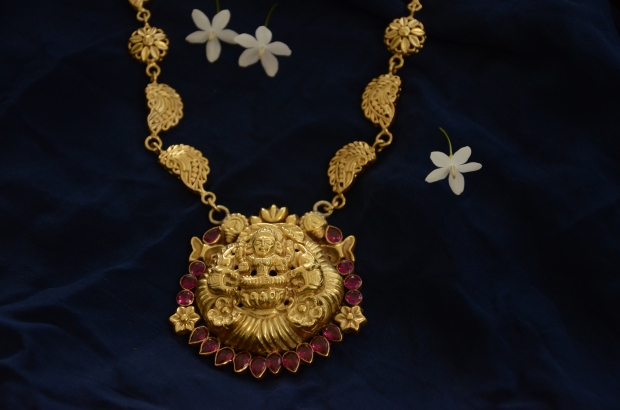 Make a statement wearing this necklace !!!! Designed around a central motif of the Goddess Lakshmi surrounded by elephants and seated on a stylised lotus. The pendant has beautiful ruby coloured stones embedded. The strings have beautiful carved foliate plaques.

This Lakshmi necklace has ruby red Spinnel stones and pearls that give you an elegant look!! Surrounded with beautiful Shell like motifs , it has intricate lakshmi with nagas on the side panels.

Designed as Goddess Durga on a woven basket like base emanating like sun rays, Mounted with pure 24 Karat Gold Plating on pure 92.5 Sterling Silver with an adjustable shank.

This necklace has an incredible mahalakshmi motif in nakashi work. Deep Ruby coloured spinel stones fringing the pendant as well as providing the arms of the necklace each painstakingly laid in a gold plated cabochon setting. This gorgeous pendant has Goddess Lakshmi seated on the Lotus with her hands in a blessings position. The pendant has 6 ruby coloured stone cabochons and a fringe of ghungroos on the base. We have a lovely combination of ruby coloured stone, pearl and gold plated beads alternating in the necklace, giving it a very graceful and refined look.

Add statement to your outfit with this beautiful Mahalakshmi Hasli. This statement pendant has beautiful ruby & green coloured stones. It also has stylised motifs of peacocks and Ganesha with lakshmi seated on the lotus , in the centre.

Designed around a Durga face in a stylized floral circular motif with ghungroos at the base. Can be worn with a silver chain or a black cord (both of which are separately available on this website), mounted in Sterling Silver.

All of these designs are truly inspired by the Indian Goddess.